WHY YOU SHOULD PAINT YOUR FRONT DOOR RED

WHY YOU SHOULD PAINT YOUR FRONT DOOR RED

“A red front door for my home? No way, I’m definitely not that way out and contemporary!”

The truth is, a red entrance door will actually match almost any style or colour of home.  (Keep in mind that we’re talking about the thousands of shades of red, from dark burgundy to bright fire-engine red.)  AND!  Red doors are all the rage.  Check out any home design magazine or website and you’re sure to find a red door on any style of home, contemporary and country.  But they’re still not common enough to lose their originality.  Take a look down your street and you might find only 1% of homeowners have actually gone ahead with this exciting look. 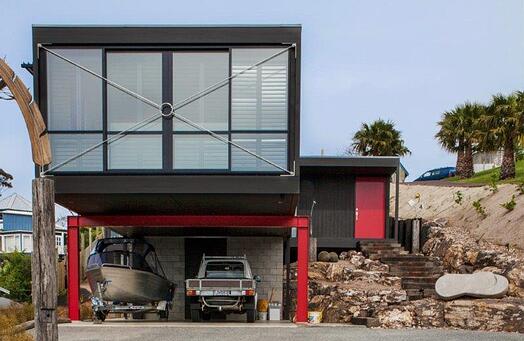 In this article we’ll discuss what a red door means, why to make your entry door the feature to the front of your home. We’ll take a look at why a red door is a fashionably acceptable way for you to be ‘out-there’ and how you can make it work with your home design.

Different cultures and nationalities see a red entry door as symbolising something different.  But the meanings all have something in common: each one is positive, motivating and attractive!  Doesn’t that sound good? – having a door that will make you positive, give you motivation and attract good things?  Joking, but you get the drift.

Chinese believe red is a lucky colour.  Having a red front door is good Feng Sui where chi will be drawn into the house.  In this case, it is believed that the entrance is like the mouth of the home.  Having a red door will attract chi, which is good luck energy, into the home.  This adds energy and well-being to those in the home.

Americans, on the other hand, have a history of good things about the old red doors.  A red door on a house meant this was a safe stop for weary travellers.  They could hitch up their tired horse and buggy and safely rest for the night.   During the civil war the North and South regions of the USA were divided over whether slavery should be abolished.  An underground railroad from South to North allowed slaves to escape to safety in the North.  Those that were part of this path to safety and survival painted their front door red as a secret symbol of support.

The Scottish, in another part of the world altogether, painted their doors red to show they’d paid off their mortgage.  Dare I say, they’d stooged long enough to be debt free (Sorry to all the Scotsmen but having some English blood in me, I had to take a li’l jab!).  In saying that, it was a proud moment and demonstration of their hard work and self-discipline – one so boldly expressed to any visitors, neighbours and passers-by.

Albert Einstein, the German theoretical physicist and mathematician, who developed the theory of relativity which led to new ways of looking at time, space, matter energy and gravity (science.howstuffworks.com) painted his door red.  Ok, so you’re saying ‘uh-oh, he’s desperately trying to find attractive examples of models who’ve gone before that have had red front doors’.  Well, if you like and know about Einstein, this could be good.  But I was more intrigued with WHY he painted it red.  As his sight failed, everything became harder to do, including finding his way home and into the house!  A red door fixed this problem.

As he so famously said, “Everything should be made as simple as possible, but not simpler.”

Why Make Your Entrance a Feature with a Red Door?

The entrance, particularly the entry door, is the feature that makes the biggest impact on the beauty and curb appeal of your home.  The National Association of Realtors say that curb appeal sells more than half of all houses that go on the market.  Don’t let any would-be buyers pass on because of a feature-less front to your home.

Speaking of the feature that visitors look for when approaching your house, it is important that the overall entrance exudes the feelings you want it to.  Mostly, we want it welcoming and warm for our visitors (or maybe if you’re being protective of what’s inside, you might want an ominous, secure-looking entrance).  Whatever the feeling, it will need a little bit of work and thought on how to portray it.

The front door sets the scene for what is to follow.  Your visitors begin their visit waiting at the front door and there is time to inspect the set-up before you get there to open it for them.  First impressions count and the adage is that you only have 10-20 seconds to make a first impression.  This could be an impression of the style of house they’re about to enter, and even the character and personality of the people within.

A red door can portray energy and personality, or warmth and security.

A Safe Way for you to be ‘Out-there’

As red doors suit almost any style, it is a safe way for you to show off a bit of personality, or be a little exciting, without going over-board.  Often homeowners want their home to contain a feature, or something a little bit different to every other house on the street.  However, it is often hard to set your own home apart, whilst still staying within most people’s moderate tastes, and without creating TOO much attention.

Red front doors are in fashion so you’re up there with the latest.  There are many shades of red so there is bound to be one that suits your style.  With their positive meanings, you won’t offend, but will rather end up with a feature that improves the curb appeal and saleability of your home.

How you can make the red front door work?

Now that you’re busting for this amazing, vibrant new colour, allow me to raise a few red flags (ahem…cough).  Although red doors are great, you need to make sure you pick the right shade for your home’s style and period of design.  Obviously the photos in this article will give you a few clues about what you like and don’t like.  Here is a few more tips:

Whatever you do, make sure the finished result compliments or contrasts your existing façade.  Don’t let it detract from existing features, such as shutters and louvres.  Contact your local colour consultant if in doubt – a reasonable one won’t charge anything to sign off your idea.

Wishing you all the best, and feel free to participate in the comments section below.

There’s sure to be help on your doorstep

FIND A DEALERget a quote